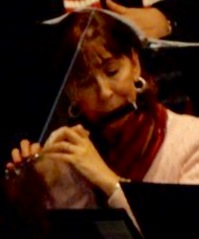 Professional Affiliations
Karen Vaughn-Smith is currently Principal Flute of the Gainesville (GA) Sinfonietta and Piedmont Orchestra. She has also played with or been a regular member of the Georgia orchestras of Columbus, Macon, Gainesville, and DeKalb. Additionally, she performed as principal flute in Atlanta's well-known Chastain Park for Joni Mitchell, The Moody Blues, and Brian Wilson. She began her orchestral career with the Northeastern Pennsylvania Philharmonic and later played principal flute with the Bartlesville Symphony in Oklahoma where she worked with Ruth Laredo, Doc Severinsen, and Steve Allen.

An active freelance performer, Karen formed Peachtree-Oh!, a woodwind trio, and has performed with
the Gainesville Symphony Woodwind Trio and DeKalb Symphony Woodwind Quartet.   She has attended
many masterclasses and participated in those of Geoffrey Gilbert and Samuel Baron.   She is also a
popular flute clinician in middle and high schools in the Atlanta area.

A private flute instructor for nearly 40 years, Karen holds both Bachelor of Music and Master of Arts
degrees and was formerly adjunct flute instructor at Marywood University in Scranton, PA as well as
teaching in Ohio, Oklahoma, and currently, in Atlanta.   A devoted teacher, her students have gone on to
study with noted flutists such as Samuel Baron, Bonita Boyd, Leone Buyse, Thomas Nyfenger, Murray
Panitz, and John Wion.